Born in Nantes (France) 19th June 1966, he was introduced to yachting at the age of 4 months by his parents. At the age of 7 his mother found a potent bribe in the form of an optimist dinghy which was purchased after young Xav had shown some good behaviour at school. In 1976 the first windsurfers appeared and that was the first sailing craft that Xav could take to the beach without Dad’s help. Needless to say that the long French summer holidays were spent windsurfing everyday. His first board was a Dufour Wing (for those who remember!) which cost £150 complete with the big rig of the time, a 5.7m2.

Q.1 – What attracted you to Windsurfing?
I sailed an Optimist since the age of 7. The Windsurf was the first watercraft I could take to the beach without any assistance from mum and dad!
Q.2 – Why do you race for Great Britain?
I moved to the UK in 1990 and initially I raced with a french number. The Brits were very welcoming. The British Windsurfing Association started supporting me to race abroad. This combined with the fact that the french national association was not very supportive for french riders to race internationally made me choose to race for GBR.
Q.3 – When did you start windsurf racing?
At the age of 12.
Q.4 – When did you start racing internationally?
It was in 1982 (I think) at the Division II European Windsurfing Championship in Weymouth – UK. Anders Bringdal won that event!
Q.5 – What are your favorite spots at the moment?
San Francisco Bay, Belmont Shore - LA and Mission Bay in San Diego.
Q.6 – Who inspired you the most?
In the early days Robby Naish dominated the sport. I am glad I was inspired later on by people like Robert Teritehau and Antoine Albeau. I also think that Dunkerbeck’s come back in 2011 is truly inspirational. Especially because he is almost my age! Some other guys who are less famous also inspired me like Frank David who won the Olympic games in 1992. I used to race with Frank in division II. Nick Dempsey the British Olympic contender (Bronze medal in Athens in 2004) was also an inspiration. I had the privilege of training with him in the winter of 2005. These people gave me a glimpse of what it takes to compete at the top.
Q.7 – What is your training program?
Giving the fact that I have a full time job I can’t sail during the week so this puts a premium on training in the gym. I normally do that every morning for at least an hour. Strength is very important in Formula and Slalom. But cardiovascular exercises are also essential. I usually do half weights and half cardio machines.
Q.8 – Do you have any special diet?
Being French I like good and healthy food! I am spoiled by my wife who cooks fresh and healthy meals everyday.
Q.9 – Do you have any tips for people starting to windsurf?
Nowadays the equipment is so much easier to learn than when I have started myself. The sport offers huge variety compared to 30 years ago. The beauty of windsurfing is that competitiveness has more to do with determination than age. Stick to it and have fun! 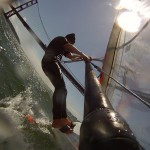