Following on from the recent ISAF decision to use the Olympic RSX board as the Youth board at the ISAF Youth Worlds Championships the RYA is pleased to announce the new Youth and Junior pathway.

It is exciting times for Youth and Junior Windsurfing and with two new boards the RSX and the BIC Techno), in the pathway the opportunities available are numerous.

The RSX has proven to be a fantastic new board providing new challenges and differing demands. With 2006 being the first season that the RSX is used at Youth level the opportunities to get ahead are plenty. Obviously the sooner sailors familiarise themselves on the new equipment and learn the techniques associated with sailing a hybrid board the better placed they will be to succeed in Youth and Olympic Racing.

The RYA's advice in order to provide sailors with the best chance of success is for sailors to transfer to the RSX equipment (8.5 sqm sail and 60cm fin) as soon as possible; however it is understood that ISAF have made this decision relatively late in the year and some sailors may have already committed to another class. Those sailors whose commitments are unchangeable can rest assured that there will still be coaching and racing for MJOD and IMCO throughout 2006. However MJOD and IMCO will be phased out of the RYA programme at the end of the 2006 racing season. 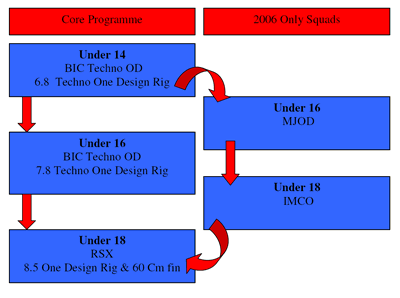 If you are a Under 14 sailor, BIC Techno with a 6.8 one design rig, is the RYA designated equipment for you.

For 2006 in this age bracket you have three choices dependent upon weight/ability and experience. If you are lighter or have come into the sport later you should choose Techno 7.8. If you are heavier (over 58kgs) you would choose an RSX board with an 8.5 sqm rig. If you are already competing on the MJOD and cannot change over to the RSX you can continue to race on the MJOD for the 2006 season.

If you are an under 18 sailor you have two choices. The RYA preferred choice is to transfer to the RSX as soon as is possible; however the other is to continue racing and training on the IMCO for the 2006.

There will be three RYA National Squads running in 2005/06:

If you have any questions please email Helen Cartwright.

The age ranges for the RYA Junior and Youth squads are the same as they've been for the last five years, which ties in with the international class rules for Techno, MJOD & IMCO.