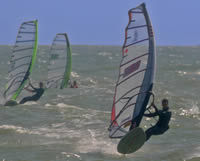 It was a long bank holiday with little wind and lots of partying, in Brighton's booming night life. But Monday morning brought with it enough wind too blow out the hangovers and set up for a perfect day of slalom.

With the Hove seafront packed with spectators, Britain's top windsurfers put on a real show for the crowds, with fast furious slalom right next to the beach.

Fighting in the pack were some of our top slalom and formula racers like Keith Atkinson and Xav Ferlet who had some real moments of spark. But they were unable to hold off Kevin Greenslade on his comeback year and Alan Jackson showing all his Scottish fight.

But with 4 wins out of 4 it was Fanatic Naish racer Dan Ellis who dominated in the tricky lumpy seas. Using an 8.2 Stealth and Falcon 111 with a Deboichet SL2 38 his speed and consistency around the course made him impossible to beat.

It was a great event for Jackson who took 2nd on his Maui Sails and with Kev Greenslade finishing of the Podium it gave Fanatic Naish a great overall finish for the event.

We caught up with Dan at the prize giving, he said.

"Its great to be out there racing with my mates, there is such a good atmosphere at the UKWA events it makes it worth windsurfing in 20 degrees less than I'm used too! I must also thank Mr Proffitt who survived being washed out of his boat while getting ready to lay the course in the rough sea's, luckily the 20 min swim didn't seem to have any serious effectsâ€¦"

There is a little break in the 2006 UKWA Slalom Cup, the next event is part of "Eastbourne Extreme" 21-23 July which is going to be a massive extreme sports extravaganza. Slalom is a great way to get the most out of a weekend windsurfing so come along and have a go.