Beat 30.6 knots on a Raceboard, win an Aeron boom

Stories on speed sailing are predominantly about tiny boards, huge winds and speeds up above 40 knots. But Tushingham speedster Bob Cunningham has thrown down the gauntlet to all Raceboard sailors who use a GPS to measure their speeds. 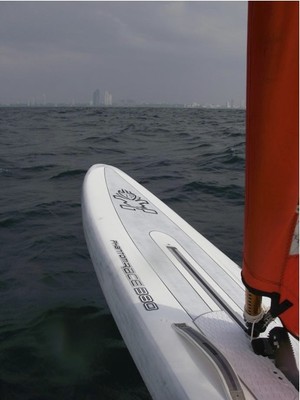 On 18th June Bob visited his local speed strip St John's Lake near Plymouth. He put in some impressive runs on his iSonic 87 and X-15 sail but what really drew the attention of the other windsurfers was the speeds he was reaching when he took his Phantom 380 & 8.5m Lightning for a spin! His top speed on the Phantom was 32.6 knots, with an average of 30.6.

You don't need specialist speed kit to have a great time pushing the limits of you and your equipment. So come on Raceboard sailors - Bob has raised the bar to a high standard... Can YOU beat his speeds?  If you do - then at the end of the year the team at Tushingham will give the leader on the GPS site an Aeron V grip boom of their choice.

Have a look at the data from Bob's session on the GPS Speedsurfing website:http://www.gps-speedsurfing.com/default.aspx?mnu=user&val=80623&uid=961

For more information on the Phantom Raceboard check out  www.star-board.com.