Over the weekend the UKWA had four representatives at the Dutch Open at Grevelingendam. Dave Coles (Starboard/Severne), Tim Gibson (Gaastra/North Sails), Chris Bond (Gaastra/K.A. Sails) and Mathieu Colin De Verdiere (Starboard/Pryde) made the journey to Holland to test their skills against a very strong fleet with competitors from Holland, Belgian, Germany and France.

Racing took place on the inland sea with competitors enjoying 10 - 15 knots of wind on very flat water over a huge course with an exciting slalom layout at the end of an outer loop box. It took time for the Brits to get used to over 30 on the start line and racing in lightish winds (we only seem to race in 20+ knots this season!) but by the end of the weekend they were securing mid fleet positions. The overall positions were confusing to say the least as this race was part of a series with all races counting and no discards until the end of the series so no results I'm afraid.

The whole weekend was most enjoyable and the experience of sailing amongst stronger competition and in a bigger fleet was invaluable to our riders. Hope to see you all at Bridlington. 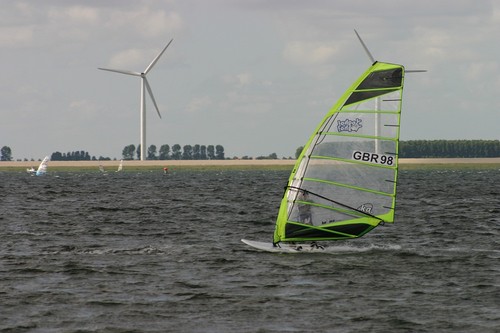