Tushingham and Starboard top of podium at Round Hayling Marathon

The Round Hayling Marathon marks the start of the racing season. In its new form the event lands on Good Friday, and by including the new SUP fleet over 100 competitors arrived at Hayling Island Sailing Club under crystal blue skies. Being one of the few events not governed by wind speed minimums the race happens (Apart from zero!). 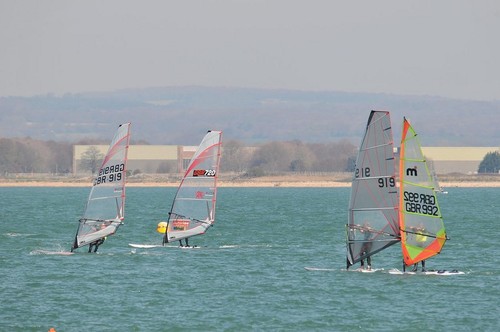 This year the winds were in the north and light, but plenty enough to get the race underway promptly at midday. Windsurfers and Stand up paddleboarders left the line at the same time for a spectacular start. Even the BBC radio reported on the start as one yachtsman phoned in to describe the event happening live on radio from his yacht.

Windsurfers reached Langstone harbour in good time - just around 25 minutes, but the final leg was a slog against the spring tide rushing out past HISC. Rob Kent racing the brand new Starboard Phantom 377 and powered by the Tushingham XR race sail 9.5 led the fleet to the finish, and Annette Kent won the women's fleet with a superb overall second. Tushingham and Starboard were sponsors of the event, but the overall awards must go to Hayling Island Sailing Club for being a superb host and the passionate organiser John Message.

Round Hayling Island Race from Tushingham on Vimeo.