Wow! What a windy weekend we had in Weymouth!

The second BSA slalom event of the year took place last weekend (10-11th May) at the OTC, which is within the Weymouth and Portland National Sailing Academy. It’s a familiar place for many of the slalom competitors as it’s a regular location for the BSA slalom events and for training weekends throughout the year. This is no coincidence, given that it’s a fantastic sailing area with clean winds and flat water. As usual we were given a warm welcome by Tris Best at the OTC.

The weather forecast in the week leading up to this event promised winds of 20 to 30 knots, and the conditions over the weekend more than delivered on that promise. On Saturday, wind speeds were consistently up to 30 knots, and in the afternoon gusts of around 45 knots were recorded. Then on Sunday, it was a little less wild with wind speeds around 25 knots. For the Master Blasters, it made for an exciting couple of days! 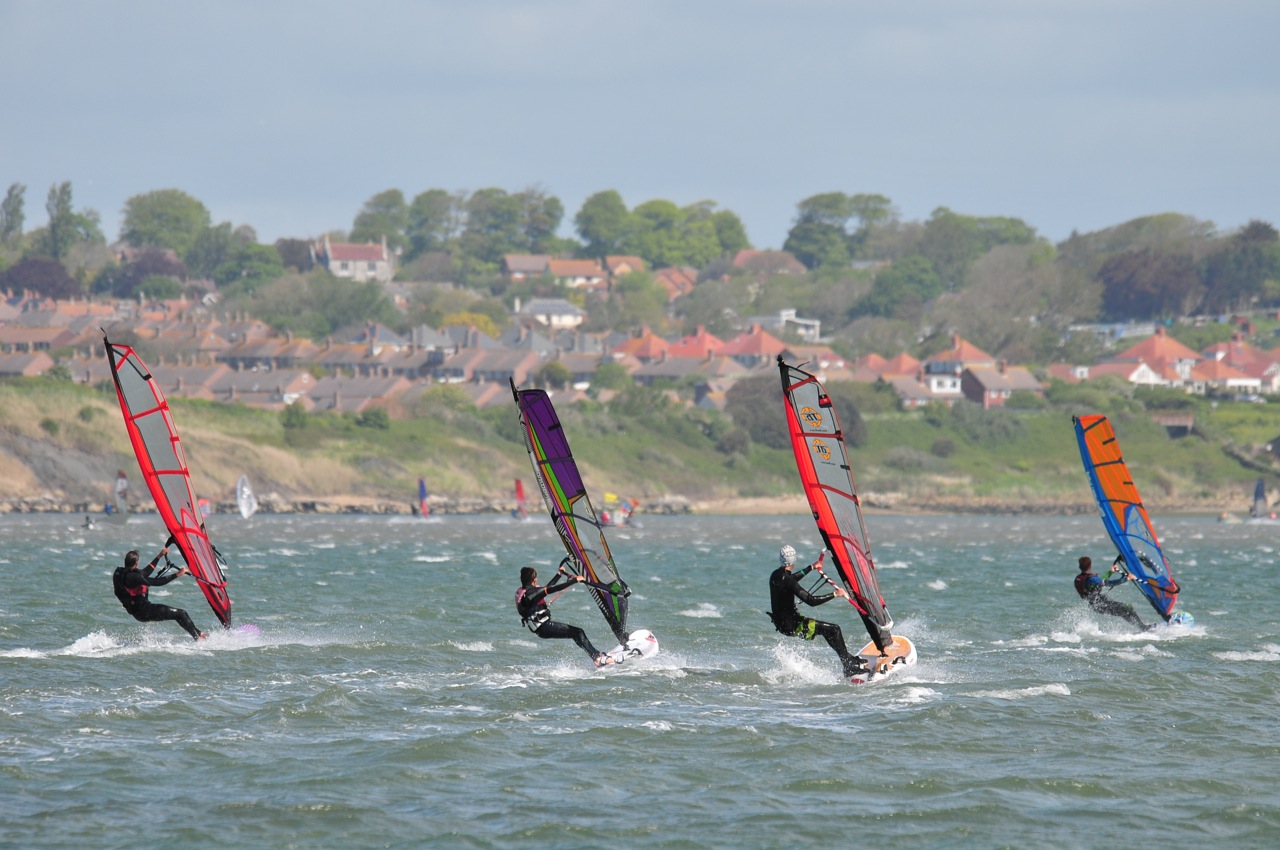 Like in Marazion we had a few Master Blaster regulars, and some new faces along for the ride. The regulars included Mandy Body, Charles Milner, Rob Duggan and me. Among the new faces, we had another lady, Mandy Waite (great to have another girl on the water with us!), and a couple of new guys, Jim and Kacper. We also had some super talented young sailors – Scotty, Sam and Alex – to show us how it’s done!

Having got all our kit rigged nice and early on Saturday morning, there was a sudden rush to change down to smaller sails just before going out on the water as we saw the white caps increasing and the chop crashing against the marina pontoon. I switched my 4.7 for a 4.2. 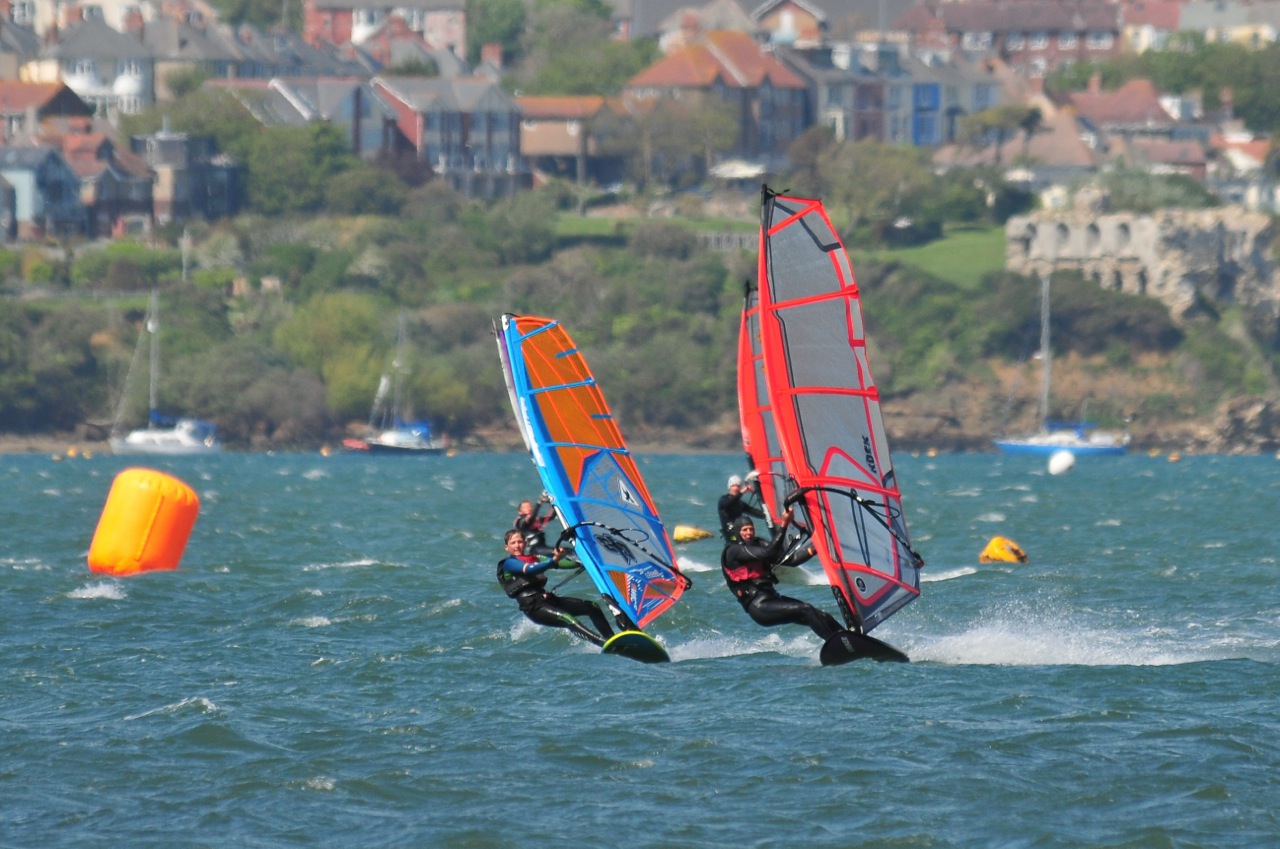 Once we ladies had worked ourselves into a frenzy of nerves watching the windy conditions, we all lined up for our first race, straight out from the hard next to the OTC to a buoy in the middle of the sailing area. With a gusty south-westerly and plenty of chop, I found it pretty challenging, especially when the racers from the Pro and Amateur fleets came flying through our course on their way back to the centre. My sailing technique left a lot to be desired as I simply clung on to my boom for dear life. However, the better sailors took it all in their stride and Brian had them racing figures of eight for the last few races on Saturday morning, whilst Mandy Body and I raced to the buoy and back. 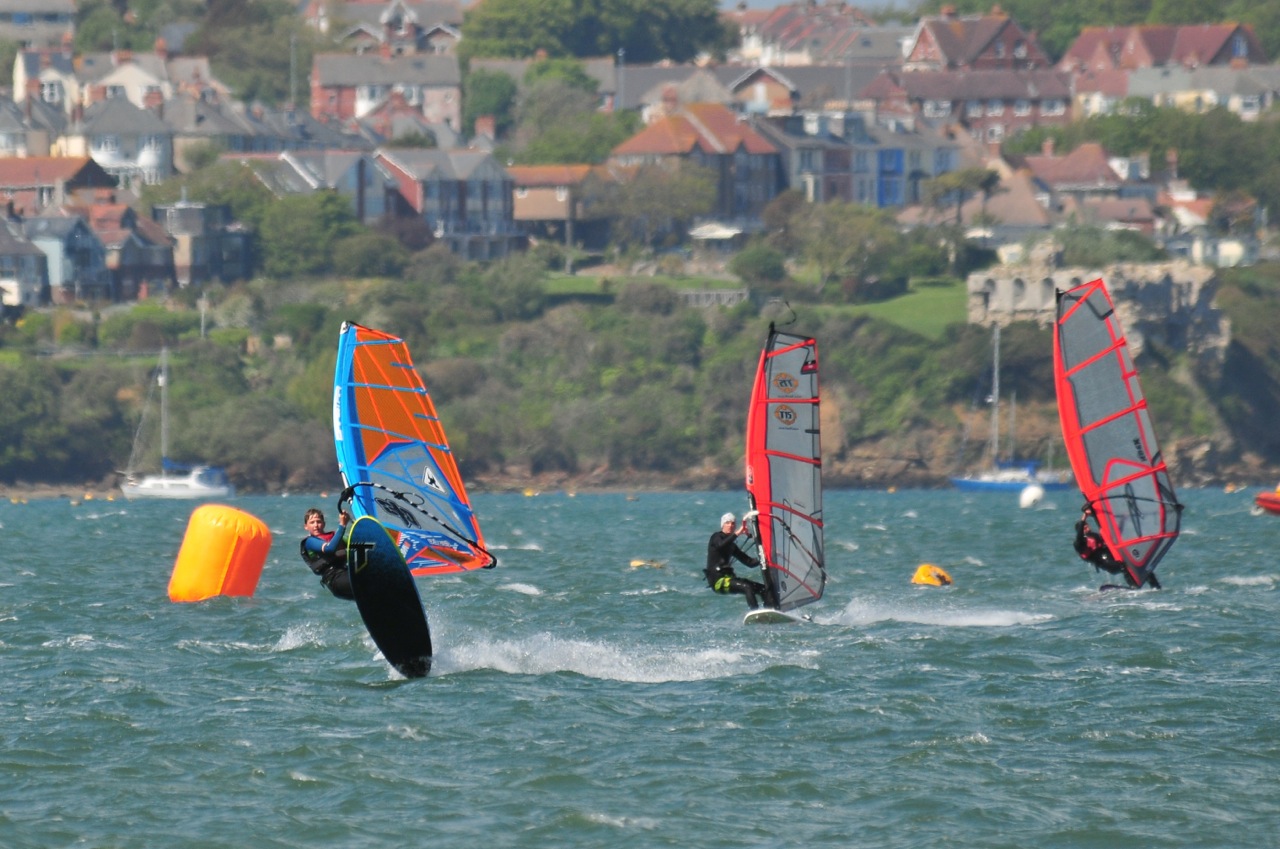 We stopped for a break after 5 races, and just as I started to rig my 3.7, the race officer called everyone back to the beach – too windy to race! So we whiled away Saturday afternoon following the Pro fleet who were coming back to the beach at regular intervals to switch for ever smaller sails. (Congratulations to Simon Pettifer, who took his first ever win in the Pro fleet!)
One of the great things about the slalom circuit is the social aspect. On Saturday evening around 25 of us went for a meal together at the sailing academy to celebrate Ross Williams’ recent Formula World Champion title. (Well done, Ross!) It was really nice to get together for a few drinks and a hearty meal after a day on the water.

We woke up on Sunday to slightly lighter winds, from a more westerly direction, which meant it was pretty much onshore at the OTC, so the Master Blasters headed round to the beach along the causeway, so we could sail a beam reach out to our buoy. I rigged my 4.2 again because even if the wind was a bit lighter, it was still pretty strong.

We then embarked on an epic series of races, breaking the Master Blaster record by completing a total of 30 races in the weekend! Once again, Mandy, Rob Duggan and I completed races to the buoy and back, whilst the stronger sailors completed figures of eight.

The sailing was great fun, and I really felt that I improved with every race, committing to my harness and using my legs to keep the board under control as I bounced over the chop. It was extremely exhilarating, especially since I’m still not quite getting into the footstraps, so I’m constantly at risk of catapulting!

As ever, there was plenty of swimming at the gybe mark, but I was still really pleased with the way I coped with the conditions and I finished the day with a big smile on my face. 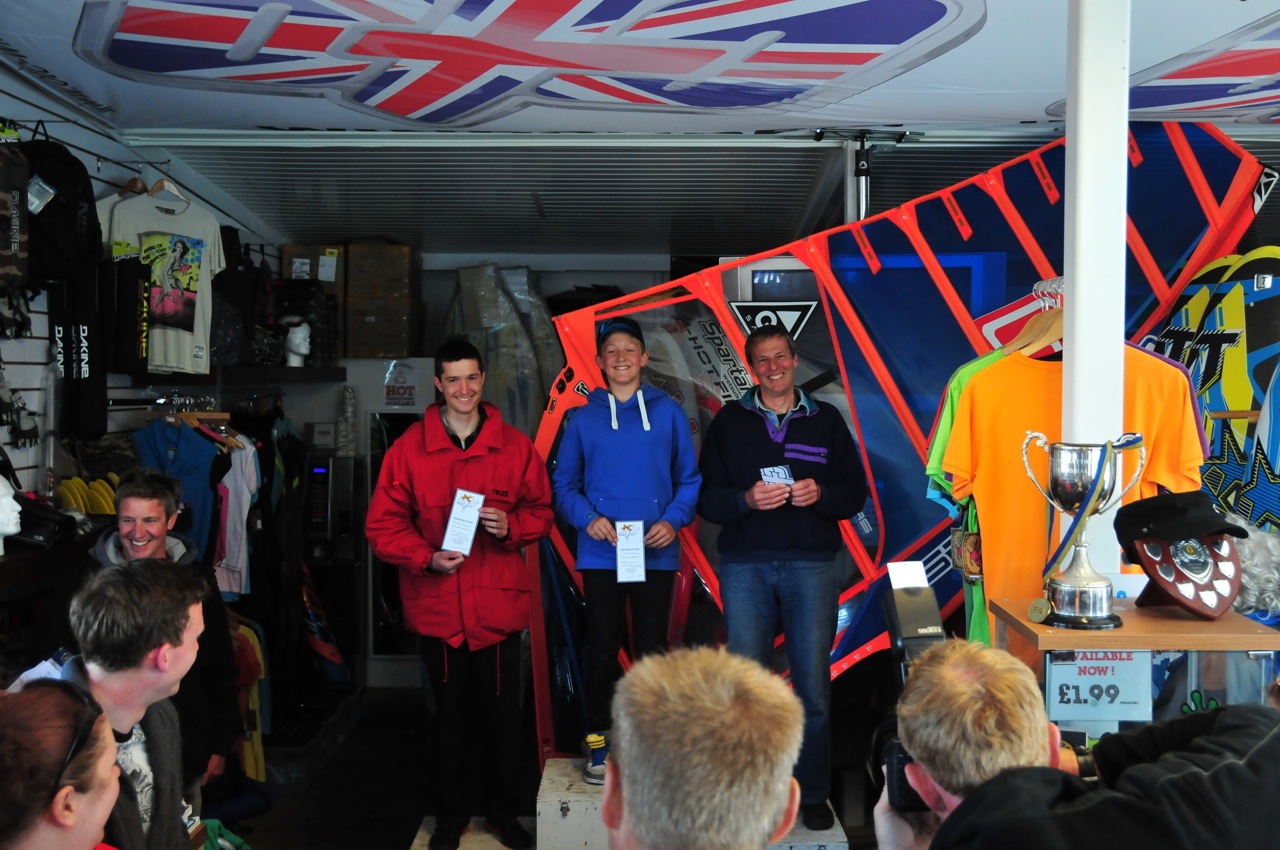 At the end of the day, we had a prize giving in the OTC. Scotty Stallman, the 12 year old rocket, took first place in the Master Blasters. Charles Milner was second and Kalper was third. Well done to the winners!

My parting word on this last event is to say how great it was to see so many women taking part. Izzy Hamilton took second place in the Amateur fleet, which was fantastic. Here are the other girls who were taking on the boys:

Well done, ladies! Looking forward to seeing more of you at the next event. Hopefully we’ll get a mention at the prize giving…

Photo credit and thanks goes to Andy Stallman for the pictures above. 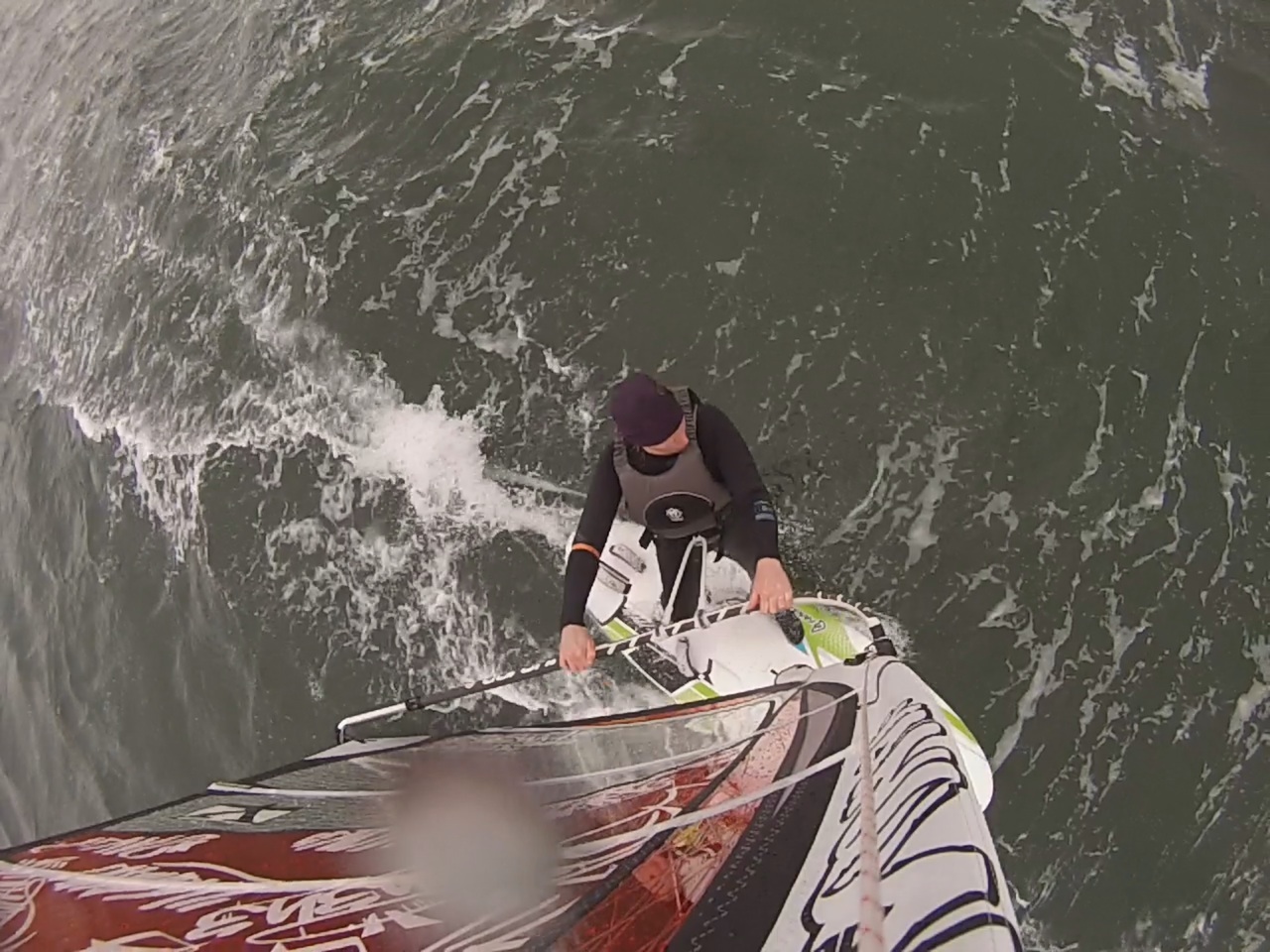