The video of the event (courtesy of Pete Davis) is definitely worth a watch:

After a great start to the season in Marazion with 6 rounds completed, could round two in Weymouth deliver? The forecast the weekend before looked amazing and day by day as the week went on the forecast of 25-35 knots for the weekend stood firm. Arriving at the OTC on Friday afternoon there were already a lot of sailors out on the water doing some last minute fine-tuning. 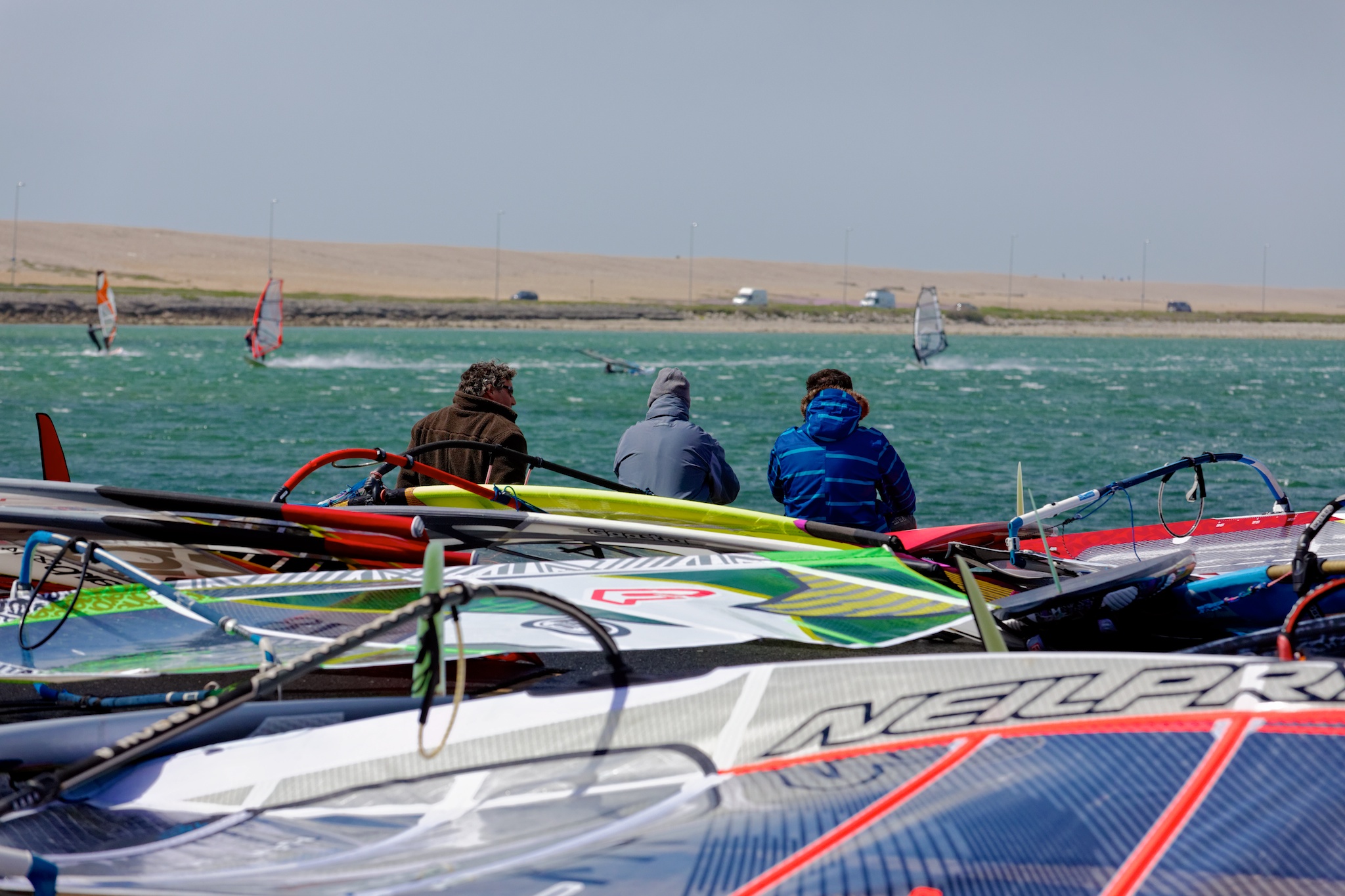 I arrived at the centre on Saturday morning at 0630 and the wind was already blowing a good 20-25 knots; not quite as windy as forecast but nonetheless looking good. I decided to rig four sails from 7.8 to 5.6 to cover every eventuality for the day. At the briefing the forecast looked to have drawn a few old faces along ... with quite a few new ones as well, including notable names such as Izzy Hamilton, Becky Ellis and Dave White. There was also an obvious presence of young guns competing in their first ever Master-blast event. It’s great to see this as the average age for the top 5 sailors in the BSA is probably closer to retirement age than their teens! 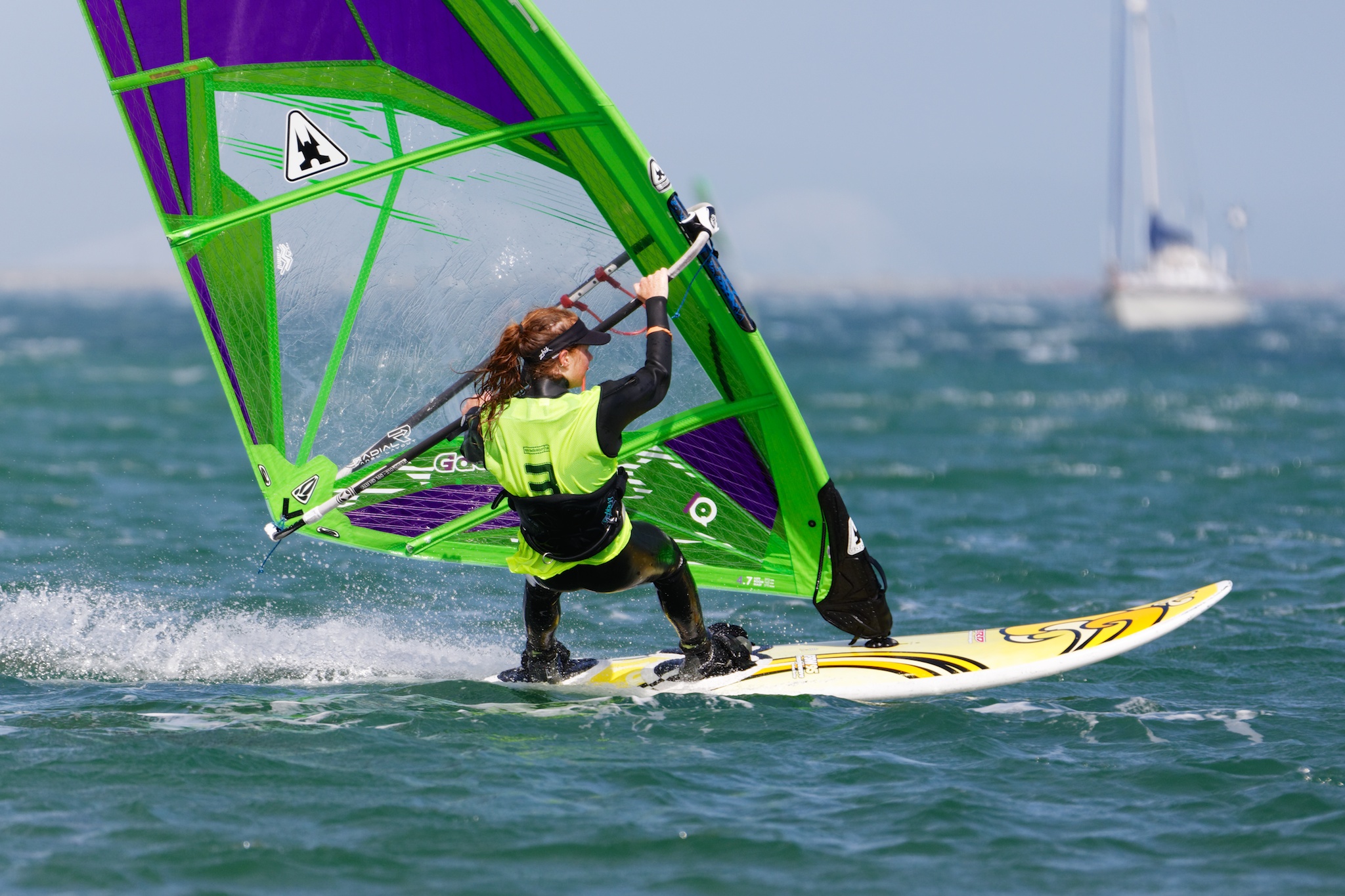 As the class flags were raised, the promised wind had still not arrived but with a solid 25 knots most sailors opted for 7.0m with a medium size board. I took my Tabou Manta 71 and my 7.1m GA Vapor. The order of play was two heats for Pros followed by two Amateur heats and then final / loser's final respectively. Most of the usual suspects progressed to the final in the Pro fleet - I was fortunate to have a cracking start and managed to hold the lead until the end, closely followed by James Dinsmore and Simon Pettifer.

Chris Guest showed great form to take 4th in front of Nigel Spriggs and Dave White respectively in their first ever BSA Pro fleet round. In the Amateur fleet it didn't take Izzy Hamilton long to convert her RS:X skills to slalom, just being pipped by Tim Gibson and closely followed by a flying Dave Strudwick. Meanwhile Brian was beasting the Masterblast fleet with local young guns Scotty Stallman, Sam Anstey and Alex Blackmore absolutely flying. 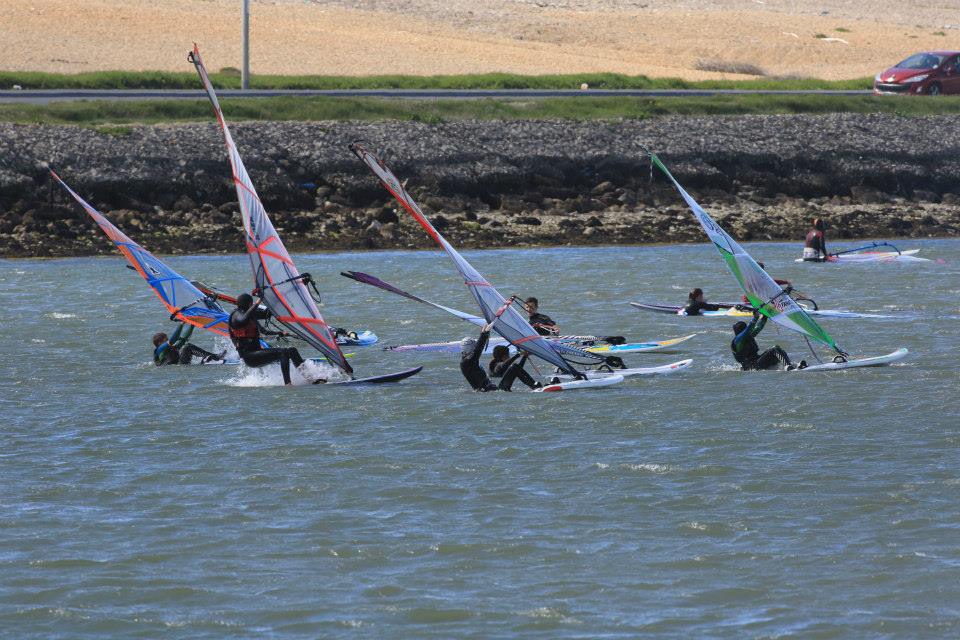 After the first round the forecast came good and the wind began to increase quickly. I changed down to 6.4m only to find that the wind was still increasing. Tess, the race officer, wisely decided to let the wind settle and called an early lunch. The wind didn't seem to want to settle so after lunch Tess decided to just send the Pros out as the wind was now gusting far in excess of 40 knots, and considered it too dangerous for the other fleets to continue. Armed with our smallest slalom sails the Pros took to the water for battle ... mainly to battle with the wind rather than each other! Many had opted for 4.2m wave sails and wave boards in exchange for the normal slalom set up.

The heats got underway and it wasn't long before the second final took place for the Pros. This time Simon ‘the Hulk’ Cofield showed where he gets his nickname from, taking no prisoners down the first reach and maintaining his lead to the end. 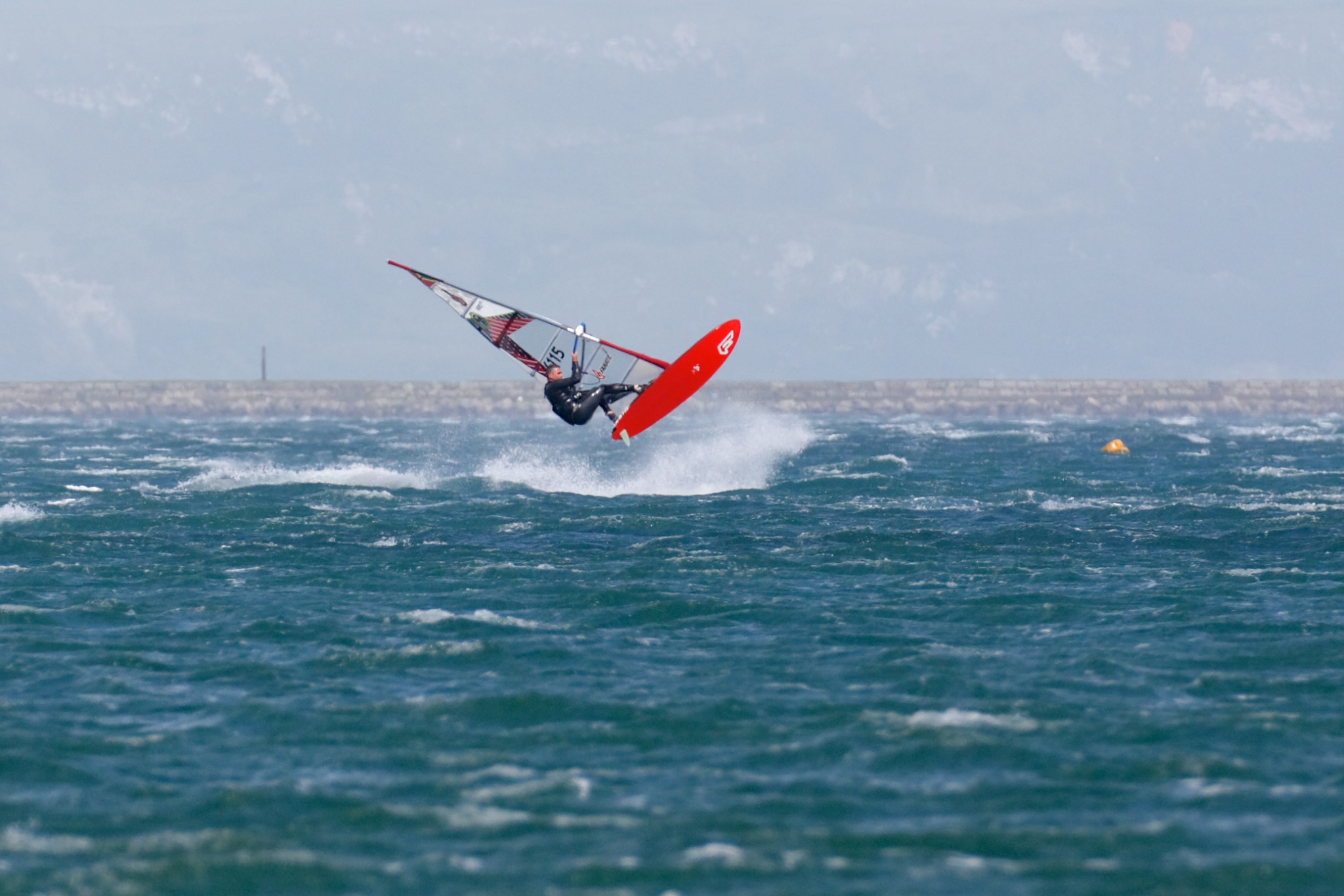 I managed to take second with James in third. The wind continued to build with wild gusts sending the fear of God into the Pros for the third round. For anyone that says Portland Harbour is flat and easy to sail in, they should have come and had a go at one of these heats! The final was windier than ever, the first reach just incredible with myself, Simon Cofield, Dave White and Simon Pettifer all fighting to get to the first gybe. 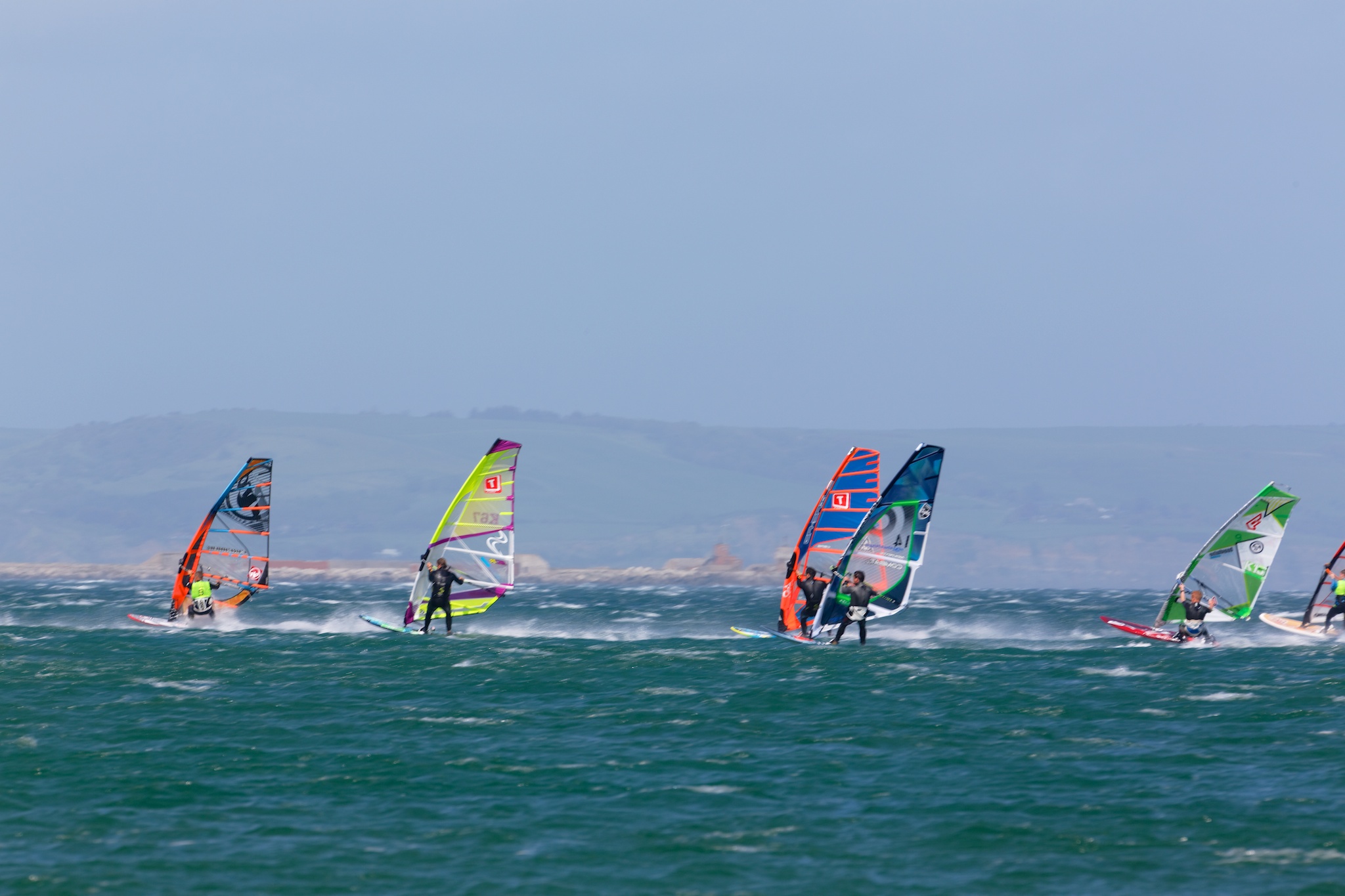 The Hulk went down followed by myself, leaving Dave, Simon and Sam Latham (who had opted for a 4.2 wave sail!) to fight it out. Simon Pettifer showed that all his hard work training this winter has paid off and over-took a falling Dave at the second mark allowing Sam to squeeze through as well. Si demonstrating great control not to lose it at the final gybe cruised down the last reach to take his first ever BSA race win. Apparently ships off the coast of France mistook his smile for the Portland lighthouse! Well done Si!

Sailors then returned to the beach for a quick break as the wind continued to build. The race officer called the sailors back for a fourth round. We all, however, had other ideas! It was put to the vote and not one person requested to continue (this is extraordinarily unusual) and racing was called for the day! [Gives some idea of how windy it really was. Ed] This left yours truly with the overnight lead in front of Simon Pettifer and James Dinsmore.

On Saturday evening The Sailing Academy put on a hearty lasagne / apple crumble meal for all the hungry racers to load up with carbs ready for Sunday’s equally epic forecast. The other reason for the meal was to celebrate Ross Williams’ recent Formula World’s victory. Being the event sponsor, he had just returned from his day on the road, and gave everyone a chance to quiz / congratulate him on his recent feat of becoming World Champion for the second time. An early night was had by all to rest the weary limbs in preparation for tomorrow’s battle.

Arriving at the centre at 0700, the wind was still blowing and the forecast was for it to continue throughout the day, again four sails rigged 7.8 - 5.6m. By the time the briefing came it didn't look an awful lot lighter than Saturday. It was however a slightly different direction - more from the west, making it feel perhaps windier than the previous day. I chose my 6.4 Vapor and 98 Manta to test before racing and it felt sweet.

The race officers intention was three races for the Pros and two for the Ams before lunch. There was the added complication for the Pros today in the form of newly crowned World Champion Ross Williams! Eight rounds would give us three discards, meaning Ross could discard all three races he missed on the Saturday! 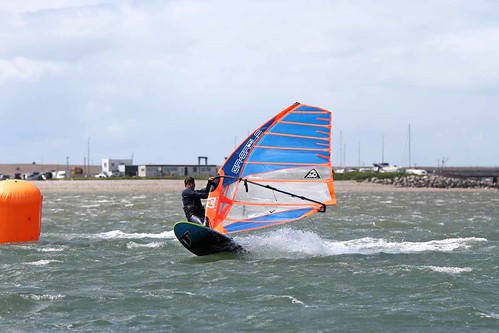 The first round of the day got underway. James had opted to take his 5.6m and looked to be flying through his heat. The final came and predictably Sheriff Williams took the win, closely followed by the flying Dinsmore with me just behind in third. In the first Amateur final of the day Mark Ingram came out the blocks flying to take the bullet, followed by Nicky Welsh and newcomer Gavin Furmenger. I’ve got to say some of the sailing in this fleet was looking really impressive with some starts being hit at full speed on the button.

Meanwhile the next round commenced. In the Pros it was Ross followed by James and this time Simon Cofield coming ahead of me as I watched my overnight lead slipping away. I had to work out how to get in front of James and in the third round of the day, with a slight change of tactics at the start, I managed to do just that, finishing second to Ross with James just behind. This put me one point clear at the front of the leaderboard for lunch with two rounds to go in the afternoon.

In the Ams this time it was Izzy Hamilton, using a more familiar sail with cams, taking the honours from Dave Cole and Nicky Welsh. In the following round, roles were reversed with Dave taking the win over Izzy and Matthew Spooner taking his first top three for 20 years! 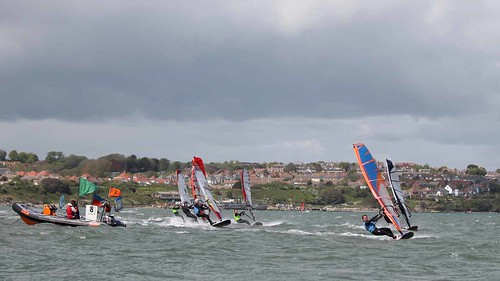 Over lunch I had worked out that assuming Ross continued to dominate and didn't have any disasters he would take the overall win, leaving James and myself battling for the other two steps on the podium. All I had to do was to beat James to second in one of the last two races...  Whilst we were all complaining of being tired, Brian and the Masterblasters were well on their way to completing a 30-race series! 30 races! Three-zero! Amazing! What a way for people to get their first taste of slalom competition.

During lunch the wind dropped and there was a lot of kit changing and testing going on. Once settled, most sailors in the Pro fleet opted for 7.0m on either their small or medium board. I took my small board with the 7.1m. It felt really good on this set-up, giving the confidence I could get the job done. Round 7 began, I was in heat one and the kit felt insane. I thought to myself, “I have made the right choice in kit.” Through to the final and stakes were high.

The two Simons (Cofield and Pettifer) were battling for fourth place and pushing the line hard. A little too hard this time in fact, with them both being thrown out of this final! Back into sequence and this had turned into a real match race between James and myself. Having the perfect start, things could not have been better as I lead the fleet down the first reach, gybing first unfortunately leaving the door open for Ross to slip through. This left me and James battling it out. My board speed was really good so I was still feeling confident.

Then disaster struck at the last gybe - I caught Ross’s wake and parked it very slightly, whilst James gybed underneath me and came out planing hard, leaving the drag race down the last reach, almost touching the whole way (I think there is a picture somewhere). With this leg a little tight James just edged it by about six-inches, leaving us on equal points with one to go!

Round 8 soon began and the usual suspects progressed to the final. No pressure ... in the great words of Derek ‘Del-Boy’ Trotter “Who dares wins!” (or comes second in this case). The wind was showing signs of dropping; I covered James off the start and all was going to plan. As we headed down the first reach I could feel the wind dropping. Knowing James was on his medium board I knew I was in trouble. Ross had got away and gybed first and James gybed second as I cut inside, hoping the wind would fill back in. It didn’t and that was the last time I planed for the race! Unfortunately for me, Ross and a couple of guys on medium boards managed to keep going, making it unlikely for the race officer to make the decision to abandon the race.

In the Ams, Nicky Welsh got out in front to take the bullet from Dave Coles, followed by Izzy Hamilton, leaving Dave and Izzy on equal with Dave winning on count back.

There was also a very competitive ladies fleet, with 6 women competing in the Amateurs and the top three coming 2nd, 7th and 13th. 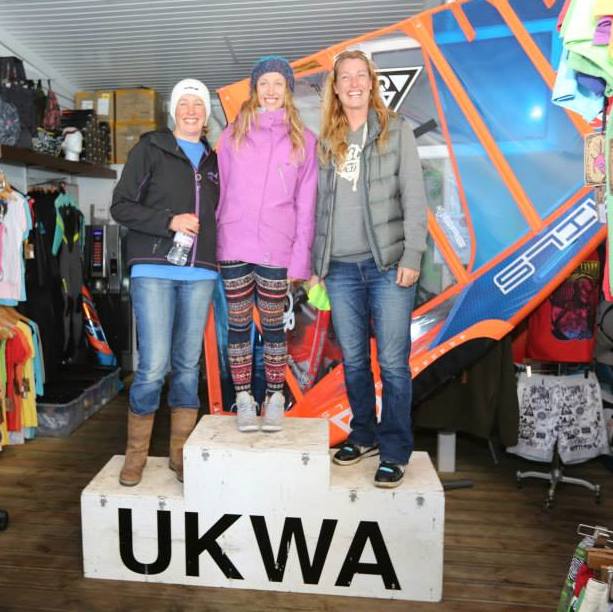 This was the end of another fantastic weekend’s racing, and for it to end up so close in both Pros and Ams just shows how well-matched the racing is in both fleets. I have to say that the result, albeit a little disappointing for me, was one of the best weekend’s racing in 25 years of competing. God, that makes me sound old! It’s fantastic to see the slalom scene growing in the UK with both new and old faces. It is especially exciting to see the Masterblaster fleet remaining strong and for those guys to get in 30 races for weekend that was so windy could only happen here in Weymouth.

I hope that everyone enjoyed the weekend as much as I did and I’m looking forward to Aberdovey in a couple of weeks time. Why not come and give it a go - it’s a great family venue with a great party! See you there.