Report from Freestyle at Mumbles

For the third event in the UK Freestyle tour we travelled to the other end of the world, well no it was just Mumbles in Swansea Bay but it felt like a long way from Sussex to me as I went via Cornwall for a few days.

Arriving on Friday I checked out the area and cycled all the way from Swansea to Mumbles looking for possible venues and immediately noticed a small problem, water, there just wasn't any at low tide except right round at Mumbles. It looked like the only place that would work in the promised South Westerly's was near Swansea and would only have a little water right at the top of the neap tide.

On Saturday after registration and with a surprisingly good entry in all fleets the wind seemed to swing just a little into the North West and funneled gustily down the valley just to the North of Mumbles. After sending out some wind dummys our head judge Julian Da Vall decided it was going to be possible to run something off the Mumbles seafront, which turned out to be a really good call. 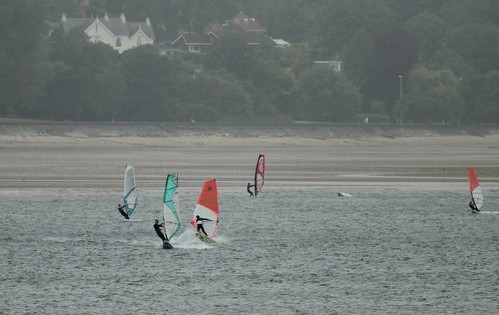 We set an increased transition time to allow the sailors to get out to the wind line and ran long heats to give them enough time to get in a decent number of moves in the gusts. Judging was done with the help of spotters through binoculars and it worked. Two full rounds were completed in dull, flat but gusty and testing conditions before a late lunch was called and the wind finally died away.

As usual a wide range of moves were being made across all the fleets including an excellent double flaka diablo by Oscar Carmichael but the move of the day for me was undoubtedly Adam Sims absolutely perfect Funnell even though some people said his Culo should score higher.

Sunday dawned as forecast hot and sunny with very light South Easterly's and it didn't look like anything was going to happen at all until around one o clock when the wind suddenly kicked up a couple of notches, the racers sprang into action and sails were seen all over the bay.

We decided on an Expression Session and the freestylers took to the water only to find the wind just not quite strong enough for them to plane, old school freestyle on shortboards was fun to watch though and Nic Hibdige was deemed to be the winner with a combination move that we didn't even have a name for so just drew in hieroglyphics on our judging sheets. 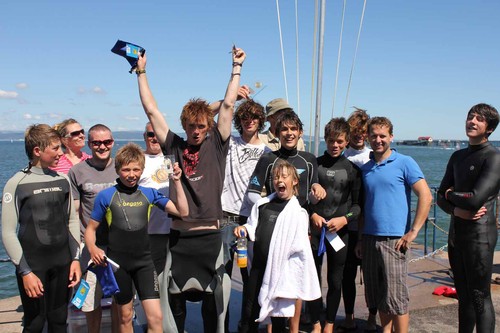 Many thanks to Phil and Danielle of getwindsurfing.com for spotting assistance and the excellent photos considering the conditions, to Ben for his help in judging, to Linda for tabulation and to the Dad's Club for flags and timing.