The 2011 Raceboard season has been dominated by strong winds making it the most exciting for many years. The lightwinds had to come, and sure enough at the British Open Championships on Oct 1st and 2nd at Portland, the high pressure and unseasonable hot temperatures set in. Lightwind tactical racing, to the experienced sailor, is as much a challenge as in the strong stuff - if it is not - it should be, because that is what makes a champion.

Rob Kent sailing on the latest Tushingham XR Race 9.5m clocked in his most impressive set of results all year. He won the Raceboard National Open Championships on minimum points, 3 firsts to count. Rob reported:

The versatility that the new XR racing sail gives is amazing. Tushingham wanted to design a sail that spanned a wide wind range at the highest level of competition. This weekend we had winds as low as 3knots on the course. At the start of the season Dave Hackford showed that this sail is blisteringly quick in planning conditions, and now having had the lowest wind regatta of the year this sail has proven to perform in all wind bands. Well done Ken Black

The top of the British Raceboard fleet is now hugely competitive. Mark Kay finished 4th in the recent World Championships in Spain - and Harriet Ellis returned home with the World title crown. The Starboard Phantom 380 is the board of choice for pretty much all serious competitors.

If you would like to know more about the racing in 2012 log onto www.ukwindsurfing.com. The UKWA is the association responsible for National racing.

www.tushingham.com to learn more about the XR racing sails

www.star-board.com for more about the Phantom race board. They have a new radical concept for 2012. Check it out! 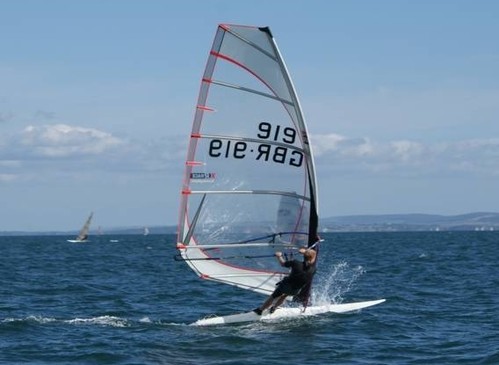