A happy 19-person british team returned from European Championships last week. It was a lot of fun, with some returning to international competition for the first time in a while, and the youths at their first international raceboard competition. There're some great photos, videos, and results on the event website. 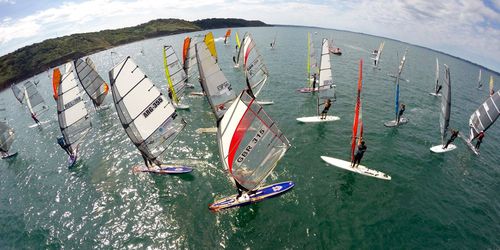 Much of Tuesday was spent waiting for wind, but by mid-afternoon, there was a nice 10-14 knots for the 75 raceboards and 16 open division II competitors. Two races were completed for the men, and one for the women before the wind became too light. Mark Kay was really fast whilst the wind was in double figures, bagging a 3rd in the opening race, but then adding a 22nd to his score! Louis Morris started with a solid 5th and a 2nd, but was disqualified from the second race in a protest. Lewis Barnes was on brilliant form, ending the day in 6th overall. Jeanne Mailhos (FRA) hadn’t raced for 12 years, but made her comeback a good one by winning her race, with Annette Kent the first placed brit in 4th place. Nicolas Huget of France made it clear that he was the one to watch, winning both races in the mens fleet with the other top runners being: Toni Collomar Torres (ESP), Curro Manchon (ESP), Christophe Boutet (FRA), and Fernando Consorte (ARG). Rob Kent sailed well but seemed pretty lucky with seaweed and didn’t find the results he wanted. In the youths Maxine Quentel of france was very fast, but Julian Tait, Galahad Wisbey, and Tom Sambrook were all in contention, and it was early days! 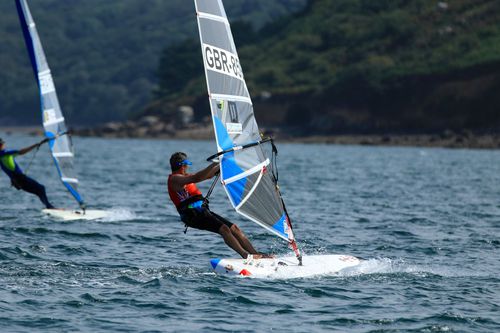 Day two was a little colder, but with a good 8-12 knot NE’ly breeze, the women were sent out first to complete their second race before the men and D2 launched. The course was close to the shore, and with strong adverse tide in the channel, it really paid to tack close to the shore. Jeanne got it perfect and won the race once again. Great Britains Alysia Gibson and Molly Howell also took advantage of the lighter current inshore to finish 2nd and 4th respectively, with many older and more experienced competitors in their wake. The men also started a race, and Louis was keen to put the DSQ behind him, pumping his way to a brilliant 2nd place, but unfortunately a thunderstorm forced the race to be abandoned before everyone could finish.

With only two races completed for each class, everyone really wanted more racing to get a good championship. However, there was no wind at all on day 3. Finally, on the fourth day, every fleet completed 4 good races in 8-10 knots of northerly breeze. The conditions were incredibly tricky, the gusty and shifty offshore wind and a turning tide meant that no race was the same, leaving some difficult tactical choices. Louis Morris used safe upwind tactics, and managing to pump onto the plane and find the gusts downwind to finish 3rd in the first two races of the day, but got punished by committing to the wrong side of the course in the third race. After every race, many of the competitors could be heard saying “I just went the wrong way” – it was really hard to get it right! Lewis Barnes enjoyed the shifty conditions to post two top 10 results and put the pressure on Mark Kay for the heavyweight podium, but Mark was a little more consistent and there was only a point between them at the end of the day. Rob Kent came away a little frustrated, as he struggled to turn his good speed into decent results after a few bad starts and getting the wrong side of the tide, shifts, and gusts. Julian Tait was solidly 2nd youth, but Maxine Quentel was just consistently a little bit faster. It was a real close battle for 3rd youth though, with Lars Muehmel of Germany only a few points away from Tom Sambrook and Galahad Wisbey. 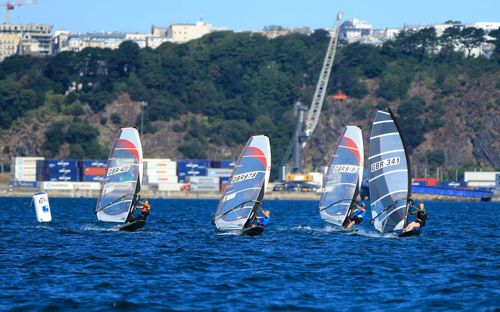 Molly Howell continued her amazing performance from day 2, finishing 2nd in one of the races, and finishing the day in 4th overall. Annette Kent was one of the many sailors scratching their head with the constantly changing wind and tide, struggling to get consistent results, but finished the day with a 2nd place of her own. Emily and Rebecca Kent, and Alysia all had great results of their own, but like most, found it hard to keep consistent.

The morning of the final day was spent waiting for wind once again, but by the early afternoon, a light sea-breeze had arrived and a relatively short course was set close to the shore. The fleets were closely packed, but the patchy wind mixed things up downwind as some racers found themselves caught in now wind whilst others were able to plane. Lewis Barnes had a great race, finishing 7th, which put him in a strong position for 3rd heavyweight. By the start of the second mens race, the wind had filled into a nice 12 knots, but it was 18 knots by the windward mark, and many of the sailors were having a hard time controlling their light-wind sails. Downwind was especially difficult, as the tide and proximity to the shore made it very hard to make the leeward mark in one gybe. One further race was completed to finish the regatta. Mark Kay had tidy gybes and superb upwind speed, ending his regatta with a 7th and a 4th. This let him just snatch the 3rd heavyweight prize from Lewis by 1 point. Louis started the day 6 points from the podium, and really needed some good races to stand a chance at the podium. His speed wasn’t bad, but missed the layline, found a lull, and was crashed into on the start, so took home a 5th, 5th, and 6th. 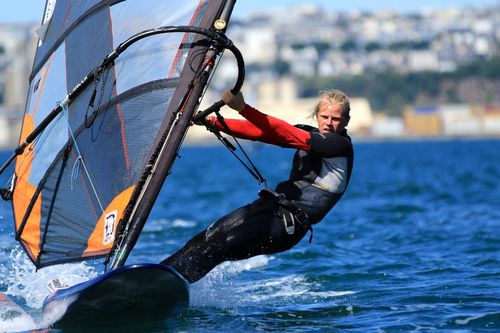 Annette Kent really enjoyed the stronger wind conditions, and added a 2nd and 3rd to her score to chip away at the podium. Unfortunately for her, the race committee decided not to run a third race (possibly because several of the womens fleet were struggling in the stronger wind), and she was left hanging just 3 points from the podium in 4th place. Molly prefers light winds, but did enough to keep 5th overall and 1st youth, even ahead of last year’s world champion Ilona Grinberga. The UK completed the youth girls podium with Alysia Gibson, competing in her first raceboard event above regional level, and Rebecca Kent, just two points ahead of her sister Emily.

Despite the wind not playing ball all of the time, the race officer managed a 9 race series. The level of the fleet was really high this year, and it wasn’t easy to get consistently high results. Two people who did make it look easy were Nicolas Huget and Jeanne Mailhos who won the championship by a sizable margin. The conditions were really tactically testing, and made for some pretty exciting racing. The Raceboard UK team would like to thank the UKWA for subsidising our coach boat and offering grants for 4 youth sailors to attend, as well as all of the event organisers and committee. We had a lot of fun on and off the water, who wants to join us next year?

Full results, gallery, videos can be found at the event website: http://europeans2016.raceboard.org/ 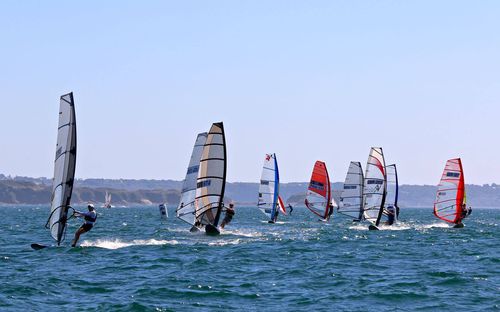 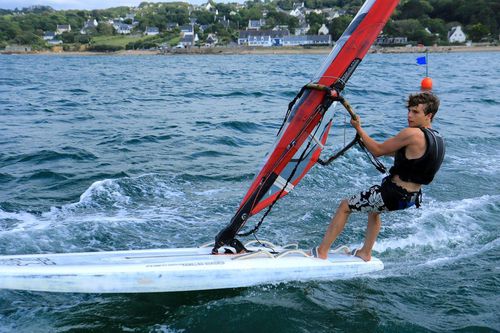 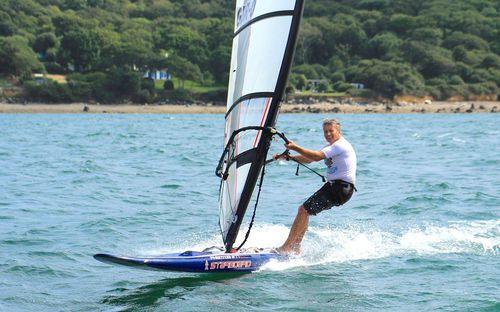 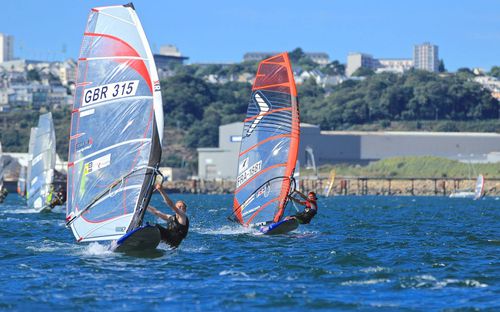 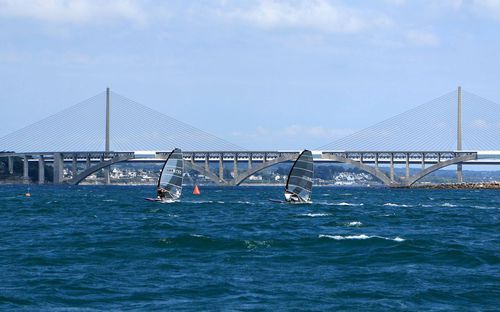