The UKWA returned to Weymouth and Portland National Sailing Academy for the fourth event of the 2016 cup series, which decides the national champions in Raceboard, RSX, Techno, and Formula. The large racing area, clean and consistent wind, and great facilities make it one of our favourite venues for racing. The forecast was promising for Saturday, with 10 knots building to 16 or so by the end of the day. 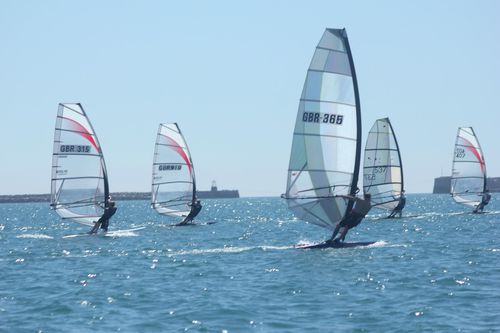 Unfortunately the wind never really came through, and the competitors had to make do with 5-10 knots, gusting 12 by the mid-afternoon. Although the breeze was light, it was without significant gusts or shifts and the winning strategy was normally to get a good start, and heading to the left hand side of the course as fast as you could, tack onto the layline, and pump downwind. 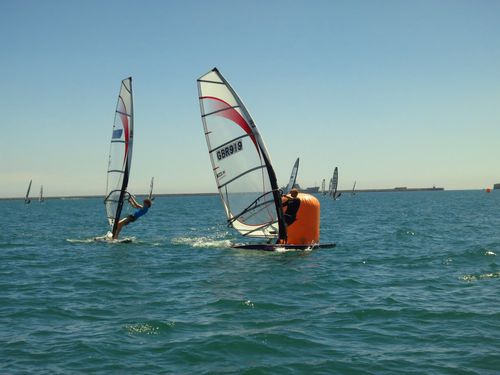 Leading the way upwind were Louis Morris, Rob Kent, and Mark Kay, with Lewis Barnes and Tom Naylor also looking quick. It was often tight at the front, and nobody could rest without loosing places. Louis generally had better starts and downwind speed than most, and used this to his advantage to win all 4 races. Rob Kent finished 2nd in both morning races, but as the wind reached double figures in the afternoon, Mark and Tom found form, and used their impressive speed to finish 2nd and 3rd respectively in both races after lunch. 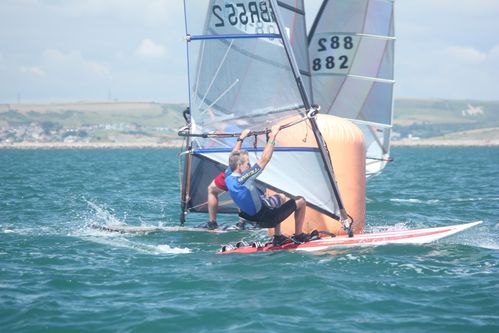 In these light conditions, it is often hard for the 8.5’s to keep up with the 9.5’s, who have a little extra power to stay on the rail upwind or get planning on the reaches. However, Annette Kent and Harriet Ellis were never more than a few places apart, but it was Harriet who had the edge with a 6 point lead by the end of the day. The youth sailors are getting faster and faster, and gave the more experienced 8.5’s (Harriet and Annette) a run for their money. Galahad Wisbey was super consistent, starting to find his form in his less-favoured light wind conditions, but some good race scores from Julian Tait and Molly Howell meant that the scores were very close, with the other 4 youth’s not far behind. 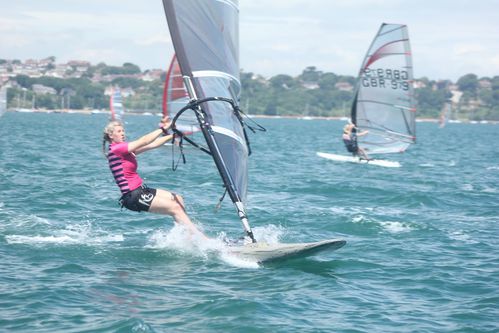 The forecast for day two was pretty terrible, but after a short delay due to a protest hearing, the race officer got the raceboard fleet out for some fun 5-6 knot racing. The wind was a little less consistent than Saturday, but being so light, the hard pumpers were rewarded, and it was the turn of the young 9.5’s to take the top 3, with Robin McAllister and Lewis Barnes pushing Louis the whole way round. Lewis maintained his form, and took a strong second place in the next race, really putting the pressure on Mark and Rob for 2nd and 3rd with only two races remaining and only 1 point separating the three of them. 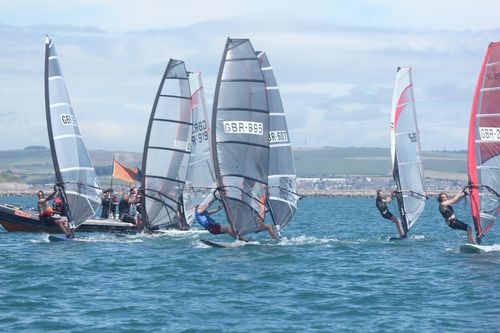 As the sun shone, the wind built to 8-12 knots for the afternoon, and Mark Kay really turned it on to take second in both races behind Louis, cementing his place as runner up in the overall event. Lewis was unlucky with a 4th and a 7th, handing Rob 3rd place overall, but just edging ahead of Tom Naylor to take 4th place. 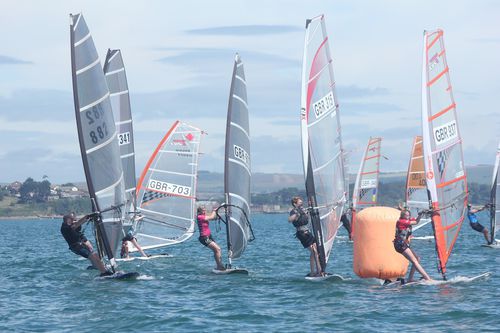 Tight racing at the windward mark.

Harriet Ellis was on great form on Sunday, and finished a couple of points ahead of Annette in each race, to deservedly take the prize for first woman. It was all to play for, for the youth prize, and it was a close battle between Galahad and Julian. They eventually finished the event on with tied points, but Julian took the prize due to counting a 7th place compared to Galahads best score of a 9th. 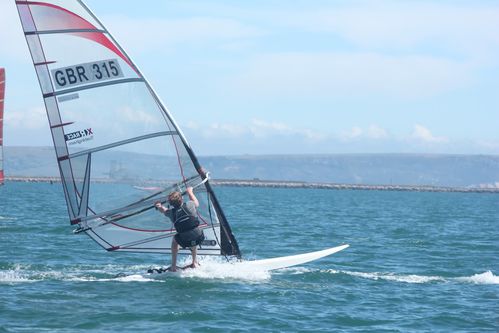 Julian Tait snatches 1st youth by the narrowest of margins.

The next event of the series takes place at Pwllheli in north Wales at the end of August, but many of the raceboard fleet will be absent, making the journey to Brittany for the European championships. Good luck to them, and make sure that you follow their results via the Raceboard UK facebook page, or the event website: http://europeans2016.raceboard.org/. 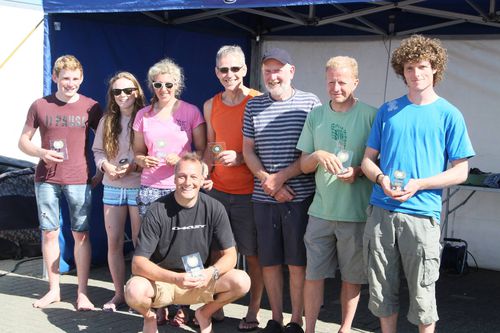 The winners (photo by Colin McCann)