This year’s Poole Windfest saw a brand new type of competitor take to the water. Introducing the ladies. 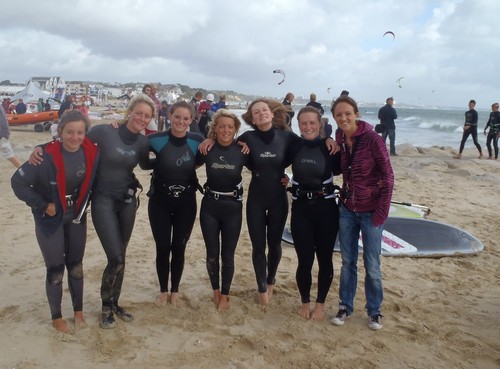 Seven of us from the fairer sex decided to show our male counterparts not only that we can we crank on our own downhaul, but also that we can hold our own when it comes to competition. OK, so we may not all be graced with an inbuilt ability to shaka, spock or eslider, but we can rock a slick carve gybe and chop hop to our heart’s content. It was high time for the ladies to shine.

Enthusiastic as that may sound, that’s hardly how it started on that slightly drizzly Saturday morning as we huddled into the skippers’ tent for what was, for most of us females, our first EVER competition briefing. The boys stood there, nodding knowingly and making throwaway remarks about “ladders” and “heats”. Meanwhile us girls exchanged bewildered looks. Different coloured flags? Streamers? And how were we going to manage not falling in on our tacks and looking like a total plum as we made our way upwind before the green flag went up?

Some of us had already made up our minds to take part; the weakest amongst us were coaxed into it with the following incentives: a) it would be fun; b) it would be fantastic sailing experience; c) we’d be involved in Britain’s freestyle event of the year; d) we would actually have a UK ranking and seeing as there were only seven of us, we would all make it into the top ten. Which sounds pretty good.

But the main selling point was that it was a great opportunity for us ladies to sail together, egg each other on and enjoy the adrenaline rush that comes with being on the watery stage in front of a panel of judges that, instead of being scary, actually encouraged us to take part no matter our ability. It may have been X Factor for windsurfing wannabes, but there was no Simon Cowell here. 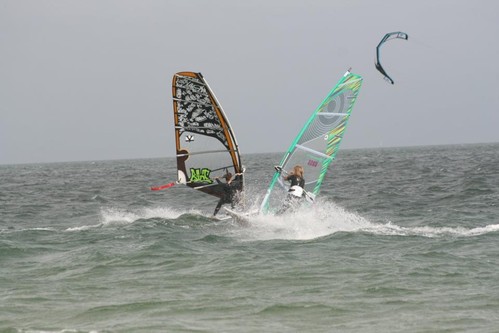 To say that we were the height of competitor coolness before our first heat would be a far cry from the truth. In reality, two minutes before the girls were up, you would probably have seen us all rushing around, frantically quizzing our fellow male freestylers for their competition top tips with a slightly crazed look in our eyes.

As all seven of us stood in the shallows, we quickly exchanged "what the heck are we doing?" glances before setting off. I don’t think that any of us will deny that the first heat was a mixture of blind panic, adrenaline and nutty confusion as to whether to tack, gybe, jump or just try something bonkers for the heck of it.

Our five minutes turned to mere seconds in the thrill of competition. In no time at all we were back on the beach, buzzing from the epic crashes and mental sea state (for once there was wind at Windfest!)

Somehow, despite the chop and big gusts coming through, we all managed to pull off a couple of moves in front of the judges - including helitacks, chop hops, carve and duck gybes and even the odd vulcan attempt. We had survived Heat 1 and lived to tell the tale!

We completed no less than three heats each day, our bodies slowly festering in our wetsuits in between sessions. By the time day two was upon us, we were trying new moves and there was a great sense of camaraderie between the ladies. Massive congratulations to Chloe who wowed the judged and was crowned 2011 queen of freestyle.

Many of us are relatively new to the UK windsurfing scene but what a great thing to be a part of. One of the best things about competing is the people you meet and the support that's around. There is nothing better than being out there sailing alongside like-minded ladies. With each new heat, you learn something fresh and someone is always on hand to offer tips on how to finish off that move you have been going for. Girls, this is your chance to come and get involved!!

A strong fleet of 7 female competitors turned up for the Poole event, with all the fleet entering their first competition there was no clear favourites for the podium, however fresh from a windy season in Vass, Bethany Mercer looked to have solid sailing in the warm up and Emily Hall straight from a top racing result in san francisco was also sailing confidently showing top form on day one taking the lead overnight after 3 heats. Sally Lambert showed good form getting close to vulcans while Lara Johnston showed off her newly learnt downwind 360's and crowd pleasing wipeouts.

On day two, the level stepped up and positions changed all day with many of the competitors finding their feet .  Stand out sailor was Ellie Ross who pulled off some solid freestyle moves in the wavy conditions to impress the judges.  However, it wasn't enough to squeeze into the top spots where Chloe Goodyear put the pressure onto Hall throughout the day taking the victory with 2 1st and a 2nd on day 2.

The girls made a great atmosphere on the water, cheering each other on and encouraging each other to do bigger moves.  Although everyone was nervous about competing at the start of the weekend, everyone came away super stoked with their performance, excited for future competition, and planning trips away to learn more moves ready for the 2012 season.  Big thanks to Trev and the Judges for encouraging us to get involved and talking us through the rules, flags and timings to make it a pain free learning experience.