The bank holiday weekend saw the UKWA heading to Herne Bay for both the North Sea Cup and the second round of the UK Cup series. The forecast for the weekend was accurate and gave us a wide range of conditions but was at times extremely frustrating. 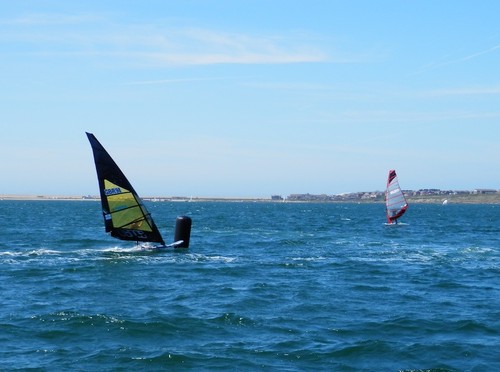 Day 1 - forecast was for wind early in the morning but due to drop at lunchtime. We awoke to around 18 knots of wind but everyone rigged big in accordance with the forecast. This proved the correct decision as by the time racing got underway the wind was only blowing 9-11 knots. Those in the fleet with 12m sails in their quivers had the advantage and in the only race of the day Chris Bond won followed by Tim Gibson and Dave Coles. 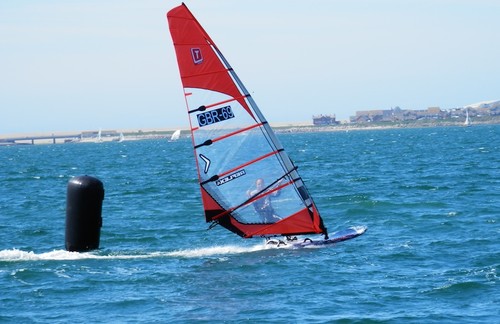 [Editor's note: Dramatism warning!] Racing may have been over but the action certainly wasn't. Bob Ingram, who has no 12m, came up with a cunning plan to take out the competition... he asked the Formula fleet, who were chilling on the beach, to help move the safety boat trailers. Firstly, Gerry Northwood took a tumble holding on to the back of a trailer and Bond, claiming not to have noticed, dragged him along the promenade. Bob was still not content, so asked for one trailer to be put on the slope of the jetty. At this point there was a glint in the eye of Tim Gibson and at the opportune moment he slammed on the handbrake over the finger of Bond who went off screaming down the promenade. During this barbaric act Dave Coles had reacted by putting his foot behind a wheel to compensate for the now released handbrake, this foot was pushed back but luckily not too badly injured.

Bond, in the meantime, had rinsed the injury under a hose and the overwhelming decision of the fleet was A&E with stitches needed. Bond, in first place, was not happy with this decision and he was saved by trainee doctor Owen Gibson who armed with needle and thread put 2 stitches in without the aid of any anaesthetic. No tears but plenty of beers later saw Bond through the ordeal. 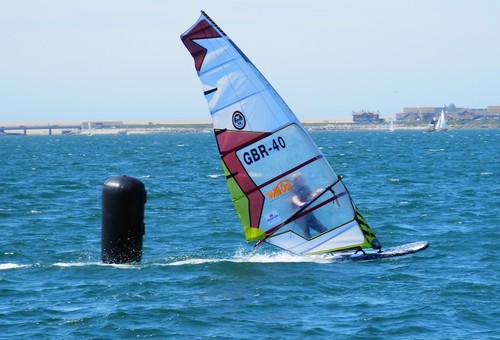 Day 2 - ground hog day! We had just enough wind for one race and this would be the only counting race for the North Sea Cup. The race to the first windward mark was pretty close and leading the way was Jason Clarke who was now getting to grips with his new fin. As the race progressed, places constantly changed but Bond and Dolphin managed to distance themselves from the rest of the fleet in an ever decreasing wind. The race to the line was frantic but it looked like Bond had secured it on a late deep dash for the line. However it was not meant to be. Bond had gaffer taped a peg to his finger but, with only 10 metres left, his peggy creation flew off leaving him unable to pump and allowing Dave to power through for the win. Jason got 3rd as the wind dropped to only a few knots. Dave was therefore winner of the North Sea Cup.

Day 3 - 3 races took place on the Monday with the wind range starting at 8-10 knots going up to 15-23 by the end. The fleet were on the water for hours without the opportunity to come in and change down in the cross-offshore wind. The 1st race of the day was won by Dolphin (on a 12m) who stole it away from a slightly confused Bond (who thought the race had been binned) and a frustrated Tim (who was not happy with how the finish line was laid). Tim got rid of his frustration in the next race winning it just ahead of an unlucky Jason (who stacked it on the downwind) with Dolphin taking 3rd. For the final race of the event, the wind picked up dramatically and the Dolphin on his 12 was going to suffer. The race to the windward was incredibly close with 4 sailors tacking at the same time within metres of each other. This closeness, however, was not due to continue. Jason flew downwind followed by Bond and Tim but Dave went out the front door and his race was over. Jason lead for the entire race and, if wasn't for an extra upwind leg being added to the course, he would have won. However, on the last leg Bond managed to squeeze past to take the win close to the line with Tim coming behind Jason to take 3rd. 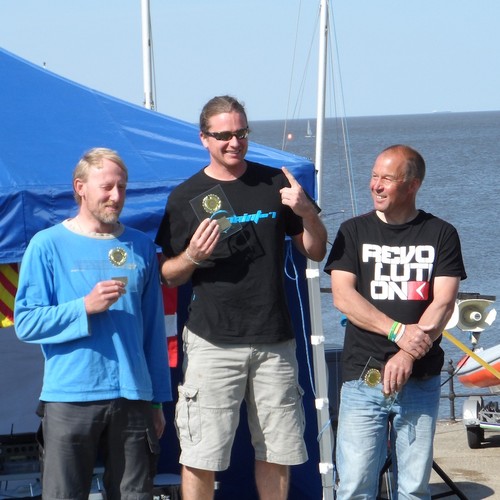 With racing over and with such a mix of results, no-one was sure of who had won. The results could not have been closer with Bond, Dolphin and Tim finishing on equal points. The results therefore had to be decided on the most amounts of highest placed finishes and were as follows:

It was a great weekend both on and off the water and hope to see as many as possible at the next event in Bridlington.